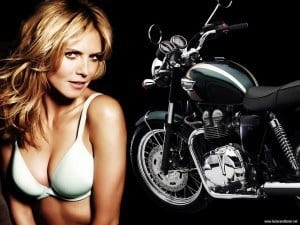 Klum announces that her mom was behind recent racy photos

Heidi Klum is completely comfortable showing skin. She’d have to be to be a Victoria’s Secret model, right? So no one was shocked when the model posted some racy beach photos on Twitter and Instagram.

But the most interesting part of the photos wasn’t who was in front of the camera, but who was behind it.

Heidi Klum’s mother was the photographer behind the topless photos Klum posted. She took them while they were on a family vacation to the Bahamas in early July.

“You will be surprised when you hear that my mom takes most of the photos,” Klum told Access Hollywood. “Yeah, my mom and dad. They were on holiday. Yes, so my mom can take some good photos.”

In reality, any photo that Heidi Klum is in is bound to be a good photo. She even makes sunburn look sexy, as in one picture when she shows off her sunburned ass.

Many Americans would likely be embarrassed having their parent take semi-nude pictures of them. But Klum is from Europe and they do things differently over there.

Currently, Heidi Klum has a judging spot on America’s Got Talent, and is still hosting Project Runway, which has begun its 12th season.