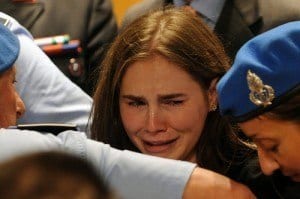 Amanda Knox has been found guilty in the 2007 murder of Meredith Kercher. Amanda Knox and co-defendant Raffaele Sollecito were originally convicted of the slaying in 2009, only to have the verdict overturned in 2011.

Amanda Knox was a student at the University of Washington in Seattle attending a one-year study abroad course in Perugia, Italy. On November 1, 2007, Amanda Knox’s roommate, Meredith Kercher was found dead in the apartment that Kercher and Knox shared. Kercher had been stabbed more than 40 times and her throat slit open.

The ensuing investigation, arrest and trial created a media circus and Amanda Knox became world famous due to the salacious stories printed in tabloids. Amanda Knox became a divisive issue worldwide with many coming to her defense and blaming the Italian authorities and courts for mishandling the case. Others used Knox’s strange behavior and salacious past as evidence that she was responsible for the crime.

Amanda Knox was acquitted after serving four years in prison and returned to Seattle with her family. However, Italian courts operate differently than US courts and there are no laws prohibiting double jeopardy. The Italian Supreme Court chose to retry the case in 2013.

Amanda Knox was sentenced to 28 years in prison and Raffaele Sollecito was sentenced to 25. Knox was not present for the reading of the verdict, but safely ensconced in Seattle. It is believed that the Italian authorities will attempt to extradite Amanda Knox to serve her prison sentence and that she will attempt to fight any attempts at extradition.  A Seattle-based extradition lawyer, Brian Zagaris said, ““The Senate considers whether a treaty country’s criminal justice is fair. She can try to make the unfairness argument in that case, but U.S. jurisprudence limits such arguments.”

Neither Amanda Knox nor her representatives have commented on the verdict at this time.