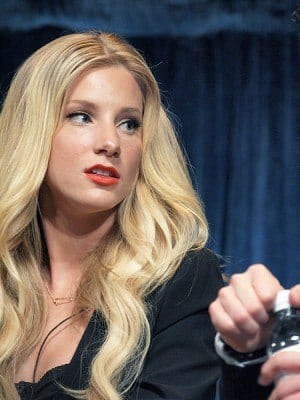 Heather Morris is the next celebrity who has fallen victim to cell phone hacking. The 25-year-old Glee actress hasn’t yet commented on whether the pictures are real or not, but it’s hard to deny that the woman pictured does look exactly like Heather Morris.

Heather Morris, who plays Britney S. Pears on Glee, is definitely comfortable in her body; it wouldn’t be a surprise for her to admit to the pictures if they turn out to be real. Before her Glee success, Heather Morris posed nude for professional photographers. When those surfaced, she openly admitted to them and told Extra, “For me, I think they are beautiful. It’s not something I’m ashamed of. Everybody should do tasteful beautiful nudes so when you get older you’re gonna be like, ‘Oh that’s when my body looked so great!’”

In the photos, a woman who certainly looks like Heather Morris, is seen in various poses. In one, she is bent over, with her face in the forefront with her breasts and buttocks in full view. Other shots show full-frontal nudity but with her face out of the shot.

Heather Morris joins Olivia Mum and Christina Hendricks as the next celebrity victim of phone hacking. Both Mum and Hendricks denied that the nude pictures were real, but Hendricks did admit that the other, more tasteful pictures, of her were real.