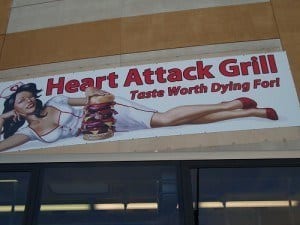 Heart Attack Grill is a classic Las Vegas/America venue featuring massive meathead burgers, generous extra-fat milkshakes and French fries cooked in lard.  Heart Attack Grill is guaranteed to fulfill all of your primal cravings for sodium, fat, calories,  and carbs, and may have again tragically fulfilled its commitment to “taste worth dying for,” in regards to its biggest fan and daily patron, John Allerman.

Let’s be honest, Heart Attack Grill is upfront about what it offers regarding both gastronomy and cardio-vascular threats.  350 lb. patrons eat for free according to house policy, unfiltered cigarettes can be bought at the Grill’s counter and payment is cash only….”because you might die before the check clears.”  If you’re trying to stay fit, you should probably join the army of scantily clad “nurse” waitresses handing out “prescription” orders or you might find yourself living up to the venues name right at its doorstep, and you won’t even be novel enough to be the first.  Do yourself a favor, and take Heart Attack Grill for the very very very real joke it is.