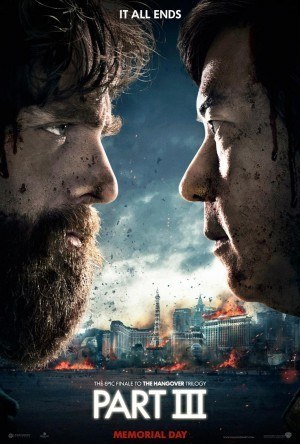 “The Hangover Part III” is set to bring the “Hangover” movie series to a close. The trailer for the third movie in the trilogy, released yesterday, was well-received by fans and followers of the series, and it features a giraffe in an unfortunate auto accident.

The third “Hangover” movie promises to be just as obscure as the first two movies, set in Las Vegas, once again. Alan (Zach Galifianakis), Phil (Bradley Cooper) and Stu (Ed Helms) attend Alan’s father’s funeral in the trailer, as Alan sings a rendition of “Ave Maria.”

Mr. Chow (Ken Jeong) will make his return to the series, along with Doug (Justin Bartha) and Alan’s father (Jeffrey Tambor.) Some movie critics are contemplating whether Doug will be kidnapped in “The Hangover Part III” due to his absence from the movie’s trailer.

At the end of “The Hangover Part II,” Stu says to his friends, “I told myself I would never come back.”

So what exactly could “it” be that is ending? On “The Hangover Part III’s” Facebook page, a poster depicts Las Vegas in flames. Some critics believe there may be a showdown between Alan and Mr. Chow.

New to the series in “The Hangover Part III” will be Melissa McCarthy, a love interest of Alan and John Goodman, who is reported to play the movie’s predominant villain. Other actors returning to their roles will be Heather Graham and Mike Tyson.

“The Hangover Part III” will be in theaters May 24.