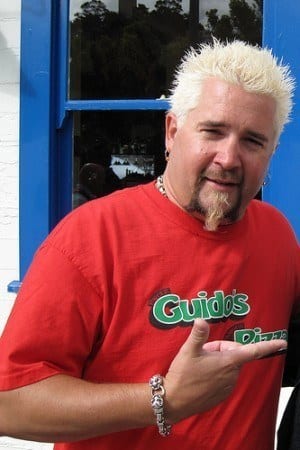 The celebrity chef defends his newest restaurant after harsh review

Guy Fieri has been creating buzz the past few days after a rather scathing New York Times review of his new Times Square restaurant was published. The establishment, Guy’s American Kitchen and Bar, was torn apart by Times writer Pete Wells. Fieri responded to the review of his two-month-old eatery by saying the reviewer must have had another agenda.

“I thought it was ridiculous. I mean, I’ve read reviews—there’s good and there’s bad in the restaurant business, but that to me went so overboard, it really seemed like there was another agenda,” Guy Fieri said on the Today show Thursday morning.

The review opened with the question, “GUY FIERI, have you eaten at your new restaurant in Times Square?” and went on to ask 34 rhetorical question that criticized the menu, the appetizers, the service, the seating and, finally the food. A few of the more painful questions were, “Were you struck by how very far from awesome the Awesome Pretzel Chicken Tenders are?” and “Any idea why it (the watermelon margarita) tastes like a combination of radiator fluid and formaldehyde?” The final and overall rating for the Guy Fieri restaurant? “Poor.”

While Guy Fieri said, “That’s tough times, especially this size of a restaurant,” he also said there’s a possibility his restaurant could not be perfect, but it should be in a couple of months.

“Without question. I’ve been in the restaurant (business) 25 years. This is an ever-changing, evolving process. Do we do it perfect? No. Are we striving to do it perfect? Yes.”