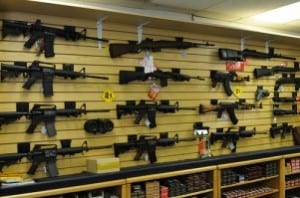 The gun control hearing that took place today held by the Senate Judiciary Committee involved emotional testimonies and high tensions between representatives from both sides of the issue.

LaPierre argued against new gun control laws, suggesting that security and enforcement of current laws is the answer to gun violence. Kelly argued for more background checks for gun sales, especially at gun shows and through private sales.

At one point, LaPierre and Sen. Dick Durbin, D-Ill., got into an argument over the purposed increase of background checks.

LaPierre said, “Proposing more gun control laws, while failing to enforce the thousands we already have, it’s not a serious solution for reducing crime.”

Giffords, who survived a gunshot to the head in Jan. 2011 while meeting with constituents outside of an Arizona supermarket, appeared at the hearing, pleading for lawmakers to take action to reduce gun violence.

“We must do something,” she said. “It will be hard, but the time is now. You must act.”

Kelly noted that the problem of gun violence is complex and involves mental illness, poverty and gun control laws. LaPierre argued that violent felons, gang members and the mentally ill in possession of firearms are not being prosecuted as aggressively as they were during past administrations.

President Barack Obama proposes a renewed ban on semi-automatic weapons and high-capacity magazines in addition to the increased background checks. LaPierre noted that the NRA is willing to work with Congress to curb gun violence but that the law-abiding gun owners of the nation should not have to pay for the acts of criminals.

Sen. Patrick Leahy, D-Vt., argued that gun rights are not at risk, but lives are.