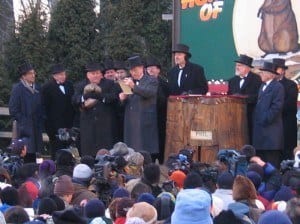 Groundhog Day 2012 has come and gone. Puxsutawney Phil emerged from his burrow at 7:30 a.m. and saw his shadow, which means that according to legend six more weeks of winter will ensue, as reported by the Washington Post.

Groundhog Day, which is a tradition over 125 years old and famously occurs in Punxsutawney, Pennsylvania, happens every February 2 and is celebrated in both the United States and Canada. As legend has it, a groundhog named Phil emerges from his burrow, and if he sees he doesn’t see his shadow, then we will have an early spring and relief from the harsh colds of winter. But, if he does see his shadow then six more weeks of the unbearable season will follow.

There has only been 16 times since 1887 that Puxsutawney Phil hasn’t seen his shadow and 99 times that the little groundhog has. Nine years are missing from the record.

Though, numerous cities throughout the U.S. and Canada have their own versions of Puxsutawney Phil, and on this Groundhog Day 2012, quite a few of them didn’t see their shadow.

But, if Mother Nature listens to Puxsutawney Phil over the others, then much of the country is in for a drastic change in weather, given the unseasonably nationwide warmth over the last few weeks.