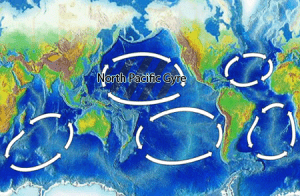 The Great Pacific Garbage Patch is gaining popularity recently in the media, especially when debris from the Japanese Tsunami in March is set to settle there.

A little context on the Great Pacific Garbage Patch: that should actually say “garbage patches,” yes that’s right there are two, and both of them are the size of Texas. Yes, that’s right too, Texas. Due to the circulation of the ocean, debris, mainly plastic, is accumulating in two particular places in the Pacific Ocean. One of the six major oceanic gyres, the North Pacific Subtropical Gyre, mainly comprised of the ocean waters between Japan and California, is where the trash is collecting.

The National Oceanic and Atmospheric Administration said on Tuesday the first pieces from the Japanese tsunami debris are estimated to hit small atolls northwest of the main Hawaiian Islands. Huge tsunami’s, not surprisingly, pull great amounts of debris into the ocean. None of this waste is contaminated by radiation from the Fukushima power plant, but one can not help but wonder, has the tsunami in Japan brought more light to the ever increasing Great Pacific Garbage Patch?

Plastic is believed to constitute 90 percent of the trash in the ocean. There was an estimated 31 million tons of plastic waste generated in the world in 2010, half of which was from the United States. The problem remains that only 8 percent of that plastic was successfully recycled, much of which is ending up in the Great Pacific Garbage Patch.

Check out the video below to see some of the damage: