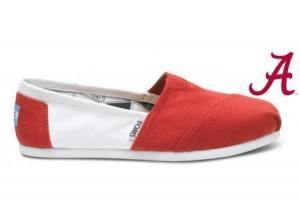 I received a pair of the Campus Classics line by TOMS for a review and was as, anyone is when receiving a new product, critical. I had never owned a pair of TOMS previously and was always slightly hesitant to spend the money. I’m more of boot and dress shoe kind of guy. I’ve had friends that rave about TOMS, but I always thought they were trying to be trendy. So, I thought I would put the TOMS Campus Classics to a rigorous test and see how they held up.

Saturday, I had to move into my new apartment, which is a third story walkup around a narrow, winding staircase. Sunday, I had to wake up at 4 a.m. and travel to Michigan to help a friend move into her new house, given that she just landed a job as a lawyer with a very impressive company. Given all this, I made the TOMS Campus Classics my shoes of choice for this horrific ordeal that I was about to call my weekend.

It’s now Monday morning, and I’m sitting on a train coming back from Lansing, MI. While I’m exhausted and my bones are breaking from moving dressers, beds, boxes of books and a bust of Elivs, my feet feel wonderful and haven’t hurt me since I slipped the shoes on. Thus, they have upheld the rigors of moving.

However, I had one more test. Are they stylish? And, that answer is a resounding yes! After we finished up moving Sunday, we wanted to check out the local bar scene around the University of Michigan, and while everyone I was with made a comment throughout the trip about how they liked my TOMS, it was much more important to me that a stranger comment on them. Not once, but four times I had people walk up to me and ask my what type of TOMS I had on. It’s fair to say that you need to go out right now and purchase a pair. Plus, you’ll be doing some good, given that TOMS will donate another pair to a child in need, and that’s good karma for you.