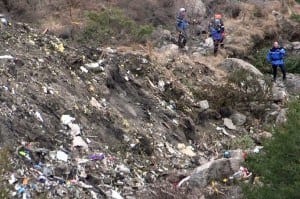 Airbus A320 crashes; no survivors

Flight 9525 operated by Germanwings, an associate of Lufthansa, on the way to Duesseldorf from Barcelona lost radio contact with their control center after about one hour in flight.

The flight went down around the area near Digne-les-Bains in the Alpes de Haute Provence region. The area was snow covered and difficult to access.

Search helicopters found that the flight had disintegrated on impact and no pieces larger than a small car was found. No bodies were retrieved on Tuesday.

Among the victims were sixteen students and two teachers from Germany. Most of those aboard were Spanish, German, or Turkish. 67 passengers, nearly half, were German. There were also two Australians and two Colombians.

The plane had descended to about 6,000 feet from its cruising altitude of 38,000 feet within eight minutes.

It is speculated that the pilot had tried to make an emergency landing since any stall in the twin engines of the airbus would have led to a crash within minutes.

The black box has been found according to French Interior Minister Bernard Cazeneuve and would be investigated immediately.