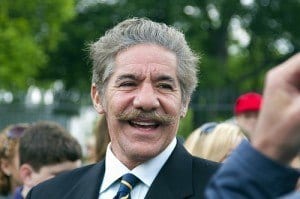 Geraldo Rivera appeared on Fox and Friends today and claimed that 17-year-old Trayvon Martin, who was gunned down in Sanford, FL., might still be alive had he not been wearing his hoodie. Geraldo Rivera has seen a mess of backlash for his comments and has since admitted they were “politically incorrect.”

Geraldo Rivera gave his opinion on the Martin shooting today when he said, “I’ll bet you money that if he didn’t have that hoodie on, that nutty neighborhood watch guy wouldn’t have responded in that violent and aggressive way.”

Geraldo Rivera said, “When you see a kid walking down the street, particularly a dark-skinned kid like my son Cruz, who I constantly yelled at when he was going out wearing a damned hoodie, with those pants around his ankles. Take that hood off people look at you and they, what’s the instant identification, what’s the instant association, it’s those crime-scene surveillance tapes. Every time you see someone sticking up a 7-11, the kids wearing a hoodie. Every time you see a mugging on a surveillance camera … it’s a kid wearing a hoodie. You have to recognize that this whole stylizing yourself as a ‘gansta’, you’re going to be a ‘gangster wannabe,’ well people are going to perceive you as a menace. That’s what happens; it is an instant reflexive action.”

Geraldo Rivera added, “I am urging the parents of Black and Latina youngsters particularly to not let their children go out wearing hoodies. I think the hoodie is as much responsible for Trayvon Martin’s death as George Zimmerman was.”

While Rivera was trying to make a point to teenagers that how they dress effects how people treat them, Geraldo Rivera went too far when he put blame on the victim.

Rev. Jesse Jackson spoke about Rivera’s comments stating, “White people wore hoods and sheets and [held] crosses and engaged in acts of terror—they were not shot. Under those hoods were judges and ministers and they used to have lynching parties at church on Sundays. They had hoods that covered their faces also.” Jesse Jackson has said he prefers not to “dignify” the comments with a response, “It’s a diversion from the pain of a child who should be alive.”