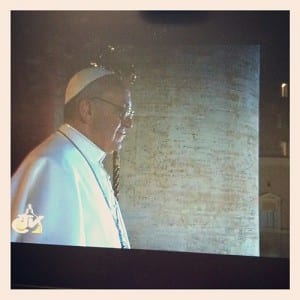 Argentinean Cardinal Jorge Mario Bergoglio of Buenos Aires was named the new leader of Catholics all over the world. He was named Pope Francis I.

The new pope is 76 years old and the first non-European pope in recent years. He is a conservative son of a railway worker, according to NBC, who promotes simplicity, humility and compassion. The new pope has one lung, as he lost the other to an infection as a teenager.

Edward Egan, Archbishop Emeritus of New York, told NBC the new pope needs to be a man of prayer who can translate the gospel message in common terms and a just leader.

Egan said he believes the new pope would “give us the kind of guidance and support that we are looking for.”

It was reported the new pope came in second during the 2005 election of Pope Benedict XVI.

The ballot process at the Sistine Chapel remains a secret within the church. In the digital age, the church has installed jamming devices to prevent cardinals and anyone else from receiving cell phone reception or using microphones on the premises.

The new pope’s first appearance was preceded by the announcement (and tweet), “Habemus Papam,” Latin for, “We have a pope.”

Pope Francis I is the first Jesuit to become a pope.

Egan told NBC that the new pope will have great compassion for the poor and that this is a great moment for Latin America.