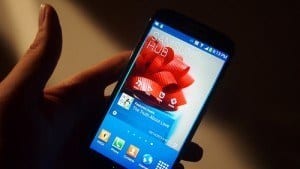 Samsung’s Galaxy S4 is expected to bring tons of competition to Apple’s iPhone 5. Announced yesterday by Samsung at New York’s Radio City Music Hall, the Galaxy S4 will be lighter, bigger and faster than older phones in the Galaxy S-series with a 5-inch screen and 13-megapixel camera.

The Galaxy S4 impressed industry watchers with its gesture controls. For instance, users can flip through songs and photos with the wave of a hand. The phone can also track the movement of eyes to start and stop video if someone is not watching it.

Also new to the Galaxy S4 is the ability to take photos from the front and back of the phone, monitor sleeping habits and listen to commands in different languages.

Business reporters speculate that Samsung’s success over Apple and other smart phone makers will depend on how far the corporation can make its phones stand apart.

Samsung suffered in 2012’s fourth quarter after the release of the iPhone 5. It plans to release two other smart phones this year, a new version of the Galaxy Note and a device using the Tizen operating system.

The Galaxy S4 is set to hit the U.S. market April 26 and will be available to consumers using AT&T, Verizon, Sprint and T-Mobile. The phone will use the most recent version of Google’s Android operating system and use Qualcomm’s quad-core chip to manage multiple tasks.

“The Galaxy S4 may not offer the dramatic leaps we’ve come to expect from each new generation of Samsung smart phone,” Mike Gikas of Consumer Reports told Bloomberg Businessweek. “It does, however, cram a remarkable number of tech-forward features into a relatively svelte package.”