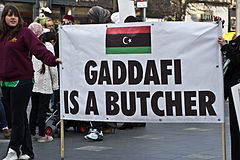 Gadhafi’s heir apparent speaks out against his death

Saif, the only one of Gadhafi’s eight children that is still unaccounted for, was to succeed his father and carry on the dynasty. According to ABC News, although Libya’s interim government had said they captured him this weekend, at the very same time Saif appeared on Syrian television.

“We continue our resistance. I’m in Libya, alive, free, and intend to go to the very end and exact revenge, Saif Al-Islam Gadhafi was heard saying on Syrian television. “I say go to hell, you rats and NATO behind you. This is our country, we live in it, and we die in it and we are continuing the struggle.”

It is not yet clear if the audio-only message was broadcasted live or if it was a recording. As the search for Saif intensifies, his brother Saadi Gadhafi, who escaped the country in September, has public lashed out about the death of his father and brother.

The United Nations’ High Commission for Human Rights has begun an investigation into the events surrounding the death of Gadhafi after video footage of his death surfaced.

According to ABC News, all of the dictator’s children lived as lavishly and ruthlessly as their father. Three of his children were killed in the revolution. Three more, including Gadhafi’s only daughter, are living in exile in Algeria with Gadhafi’s wife Safia.

In Libya there is little sympathy for anyone in the Gadhafi family.