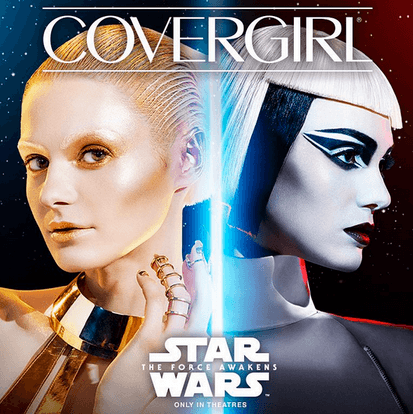 Covergirl releases a new lie of makeup for Star Wars: The Force Awakens

CoverGirl’s Star Wars: The Force Awakens is all about getting in touch with the light and the dark sides of the Force. The line will feature six new lipstick colors, three different shades of nail polish, and ten tubes of mascara. The lipsticks include a diverse selection of colors, allowing us to choose from Dark Purple, Gold, Red, Lilac, Silver, and Nude. The three nail polish colors are red, purple, and sand. As an added bonus, the products come with quotes from six Star Wars movies and The Force Awakens.

The waterproof mascaras have quotes on the bottle from the light side of the Force:

The regular mascara bottles feature quotes from the dark side of the Force:

While our heads are already spinning with the awesome looks that can be created with the makeup in the line, CoverGirl released two beautiful samples which include a beautiful bronze-gold droid look and an edgy black and white Stormtropper look.

Unfortunately, the line doesn’t seem like it’s going to include a Jar Jar Pink shade for any of the products. Bummer.

The line will be available for purchase online on Force Friday (September 4th) and in stores mid-September. See more of the limited edition makeup line on allure.com.