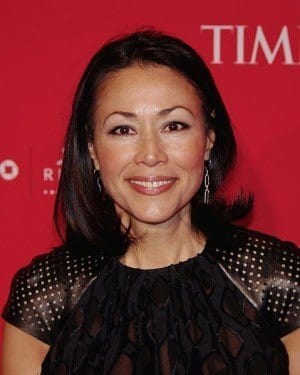 Curry has been an anchor since 1997

Gossip is swirling that Ann Curry is on her way out at NBC’s The Today Show – and at a hefty price.

Ann Curry may leave as early as this week, the sources said. Other reports say Curry will be removed from her spot before the network’s coverage of the Olympics, which begins next month.

Still, Ann Curry most likely won’t be leaving 30 Rock forever, as she is expected to transfer back to her real passion, foreign reporting.

NBC still has not commented on the matter, and they still have not even acknowledged of Curry’s departure from the show.

Ann Curry herself has not commented either and continues appearing on the show as if nothing is happening.

Some are suggesting NBC still does not have a replacement lined up to take Curry’s place.

The Today Show was once the morning ratings leader, but it has recently slipped into a tie with its competitor, Good Morning America, over the last year.

The Ladies’ Home Journal recently released experts from a previous interview with Curry scheduled for an August release that said she finds it hard to not take questions of her performance on the show personally.

“You worry, am I not good enough?” Curry said in the interview with the magazine. “Am I not what people need? Am I asking the right questions. When people say negative things or speculate, you can’t help but feel hurt.”