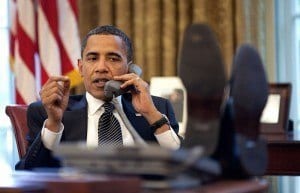 The G8 summit will not be held in Chicago after all, The White House unexpectedly announced Monday. The summit will now be held at the presidential retreat at Camp David in Maryland.

President Obama on Tuesday said he was confident in Chicago’s ability to host the G8 summit of world leaders and played down the notion that security concerns had anything to do with the decision to move the May meeting from Chicago to Camp David.

The world’s eight largest economies are represented in the G8 summit, making the summits are a target for large (sometimes violent) protests. This has made security costs a concern for host cities. Hosting duties for the annual summit are rotated among the member countries.

At a news briefing in Washington, Obama responded that the NATO summit scheduled for the same weekend will still be held in Chicago, bringing him and other world leaders to the city, including six of the eight G8 countries.

“I always have confidence in Chicago being able to handle security issues,” said Obama. “We know how to deal with a crowd and I’m sure your new mayor will be quite attentive to detail in making sure everything goes off well.”

A group, Chicagoans Against NATO/G8, filed a petition Tuesday morning to move a march from May 19 to May 20, the first day of the NATO summit.

As reported by Imperial Valley Press, the group’s leader, Andy Thayer, said the threat of demonstrations played a role in the Obama administration pulling G8 summit out of Chicago. Thayer and other demonstrators said the protest movement will shift its focus to the meetings of NATO, which he called the “military arm of G8.”

Many believe that the change does not indicate a lack of faith in Chicago, however. “We think the President wants to have a more intimate summit,” host committee spokesperson Jennifer Martinez said, according to NBC Chicago. “I don’t think this decision in any way shows a lack of confidence that Chicago can handle it.”