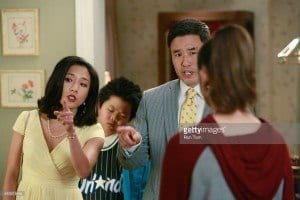 “Everyone just stood around and watched my husband’s face get milked on?”

In this episode of Fresh Off the Boat, graffiti vandalism haunts Louis Huang (Eddie’s dad) as he tries to advertise his restaurant through large billboards. The episode opens with Older Eddie reminiscing about how his dad “had a guilty pleasure—he loved gangster movies: immigrants fighting for their piece of the American Dream.”

Huh. Gangster movies as American narratives of the immigrant experience. Why didn’t we learn this in high school?

“Showdown at the Golden Saddle” continues the idealism and ambition for the American Dream from previous episodes, but here, we’re introduced to a darker (or more realistic) side of it when we’re hit with what it really takes to achieve one’s goals.

Jessica (mom) and Louis (dad) discover that vandals have drawn udders over his beaming face in the billboard advertisement.

Jessica: Nobody tried to stop them? Everyone just stood around and watched my husband’s face get milked on?

Louis: That is anatomically impossible! …I just wish it didn’t look like I was enjoying it so much.

And in the end, it doesn’t matter to the pragmatic Jessica (Eddie’s mom) that Louis was less-than-honest in his creation of the restaurant. “I would choose a good businessman over a visionary any day of the week,” she says when he admits to her that he had stolen nearly every idea for his restaurant from the Golden Saddle chain of restaurants and jumped out the bathroom window with the menu.

The great dynamic between Mom and Dad is one of the reasons that I look forward to watching each installment of this show. The usually-aggressive and blunt Jessica softens up to give Louis some much-needed pep talk when he’s feeling bad about his evil methods of achieving success.

Meanwhile, little Eddie pulls out his swagger and rebellious rap CDs to impress his neighbor, Nicole, who is at least two years older than him. He describes her appraisingly as “tough”. While distant and aloof towards Eddie, Nicole is polite to his parents.

Granny barely makes a peep (in Mandarin) this episode even though she maintains her nonchalant brand of cool. An entire episode dedicated to Granny would be interesting. I would like to see more development on Eddie’s relationship with his little brothers beyond the rivalry and petty annoyances.

I loved the scene in which Louis and Jessica challenge the owner of the Golden Saddle, who was behind the graffiti. The couple is giant ball of sass (and mobster movie references) when teamed together. I’m curious to see how this restaurant rivalry plays out in the next few episodes.