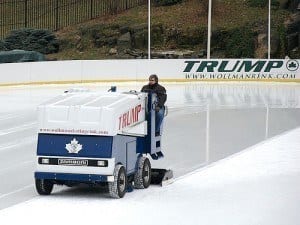 As hockey fans celebrate the National Hockey League’s return to bar flat screens across North America, they might take a moment to thank Frank Zamboni, the man who helped make the sport possible.  He is the inventor of the Zamboni, otherwise known as the modern ice resurfacer.
Just as bar flies everywhere tire from watching their fellow chuggers play darts, the NHL has finally brought hockey back, with a tentative agreement reached January 6.  Google took a timely moment today to thank Frank Zamboni by featuring his creation in their doodle.  The inventor of the Zamboni has garnered more than 1,000,000 hits since the drawing posted.
Frank Zamboni invented the ice resurfacer in 1947.  Born in 1901, of Italian ancestry and a Eureka, Utah native, Zamboni founded Frank J. Zamboni & Co. in Paramount California to build his 1949 creation, the Zamboni.
The famed Zamboni transformed a five-man, 90 minute job into a one-man, 15 minute job.  First built by attaching a blade to a tractor, the Zamboni design has evolved from being based on a Jeep chassis to the sophisticated model that just sold its 10,000th vehicle to the Montreal Canadians.
In 2007 Zamboni was inducted into the National Inventors Hall of Fame, and in 2009 he was inducted into the U.S. Hockey Hall of Fame, one of the only inductees to never play hockey.
After a 16-hour talk, with concessions on both sides, that sport is finally back as the NHL and National Hockey League Players Association finally reached a 10-year agreement.  The conflict hinged on a proposed $60 million cap; the hockey players persuaded the League to adjust to $64.3 million by the end of talks.
A shortened hockey season is expected to begin on Jan. 19 or as early as Jan. 15.