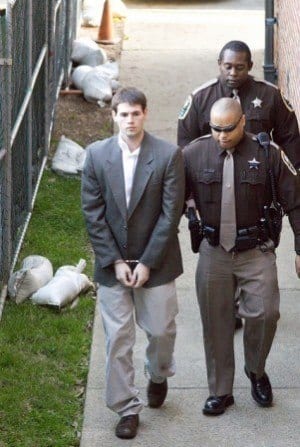 Yeardley Love, a former lacrosse player at the University of Virginia, was beaten to death by her ex-boyfriend in May 2010. Yesterday, her murderer was sentenced to 23 years in prison.

George Huguely was also a senior lacrosse player at UVA when he had too much to drink and argued with Yeardley Love about their recent breakup. The altercation left Love bleeding facedown in her bed, where a roommate found her on May 3, 2010. Huguely claimed Love was still alive when he left her apartment and that he did not mean to kill her. He was convicted of second-degree murder.

Yeardley Love’s sister, Lexie, is getting married this September, the Loves’ attorney told the jury, but “the maid of honor will be missing.” His statement moved Lexie Love to tears.

The jury’s recommendation of a 26-year sentence was reduced by the judge to 23 years. Virginia is a no-parole state, but Huguely’s time could be reduced by up to 15 percent based on good behavior. When he is released, he will spend three years on probation, during which he will not be allowed to drink or possess alcohol.