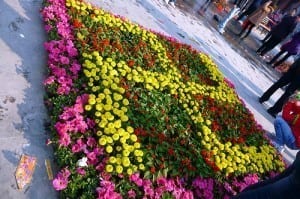 Are you interested in symbols of hope and good will being transformed into markers of oppression and hate? How about the art of stylistic forestry and horticulture? If you answered yes to one or both of these questions, then the story of the forest swastika might be one that you might enjoy.

Some rumors say that the forest swastika was planted by members of the Hitler Youth as a present for the hateful Hitler. If that was the case, then they little runts forgot to put a bow on this pissy present; what gives, tiny hate mongers?

The forest swastika went unnoticed for some time after the Führer’s fall, mainly due to its sneaky Nazi camoflauge. The leaves of the larch trees that make up the forest swastika turn to a bright yellow-orange during a few weeks in the fall and spring, causing them to stand out. For the remainder of the year it stays hidden among the greener greens of the forest.

The Communist establishment who took over after the Nazis’ departure apparently knew about the forest swastika but those darn commies decided against this particular form of deforestation. In 1992 the reunified democratic German government did an aerial survey of the area and noticed the fury of the forest swastika, and demanded it to be removed.

Without the existence of a bigoted Nazi Lorax, these totalitarian trees had no one to speak for them and 40 of them were chopped down in an attempt to reshape the forest. Despite this quadragesimal cut-down, the forest swastika continued to appear in mid-2000, like a patch of zombified tyrant plants.

Though they had no Nazi Lorax, the trees remained protected by the questionable legal status of the land that housed the forest swastika. After much debate however, it was finally decided that the forest swastika would be chopped down in December 2000.

And so it was that the forest swastika was sentenced to death for war crimes. It’s likely that even the huggiest of tree huggers yelled timber (or whatever is German for timber) during the mass chopping of this evil formation of trees: the forest swastika.