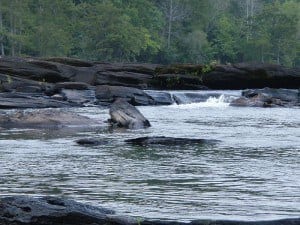 Aimee Copeland is fighting for life and limb

The flesh eating bacteria that claimed Aimee Copeland’s leg after a zip lining accident two weeks ago is spreading to other areas of her body.

Aimee Copeland has a rare condition called necrotizing fasciitis, often referred to as a flesh eating bacteria. Aimee, a 24 year-old Georgia graduate student, is now awake and alert but still in critical condition. According to her father, her fingers will have to be amputated as well.

Her family has also said that she can’t remember the events that led to her run-in with the flesh eating bacteria and that landed her in the hospital for the past two weeks and the amputation of one of her legs.

Aimee’s family is keeping a blog to inform people about her stay in the hospital. According to her family, the flesh eating bacteria has killed the blood vessels in Aimee’s hands and her remaining foot, and while more amputations are necessary, they are hoping the palms of her hands will survive.

Aimee regained consciousness to mouth the words, “Where am I?” on Friday.

Copeland is listed in critical condition at Doctors Hospital in Augusta, Georgia. Her father describes his daughter’s conditions as “without a doubt the most horrific situation that a parent can possibly imagine,” he wrote on her university blog that “Aimee is awake, understand everything and is nodding her head to questions!” She “is still on her life support, and we are waiting to hear more about how she is doing today.”

Recent reports claim that the flesh eating bacteria infection has spread to Copeland’s remaining foot and hands and that she will lose all of them. Her father went on WSB-TV and said, “I couldn’t conceive of what it would be like for my daughter to lose her hands and the only other foot she has, as well, and that appears to be what is going to happen. The most important thing is my daughter is still alive.”

The flesh eating bacteria is called Aeromonas hydrophila, and it thrives in warm climates and fresh water like the Little Tallapoosa River.

While the government estimates roughly 750 flesh-eating bacteria cases each year, typically caused by a type of strep germ, the flesh eating bacteria afflicting Aimee is even rarer. One expert knew of only a few reported cases over the past few decades.

The flesh eating bacteria can not get on the surface of the skin and burrow into your body. But, cuts and gashes, especially deep ones, are open doors for bacteria.

The National Necrotizing Fasciitis Foundation recommends frequent hand-washing and immediate medical treatment for wounds. They also recommend limited contact with anyone who has a strep infection.

The CDC stresses that the chance of contracting necrotizing fasciitis is rare.

Blood drives are being run in Aimee’s honor. Her family has set up a PayPal account and has requested monetary donations instead of flowers and gifts to help with hospital and potential rehabilitation bills.