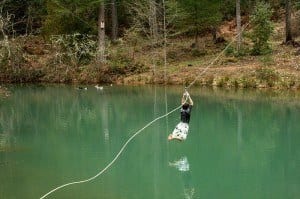 South Carolina new mother of twins is the second person this month to be affected, Georgia student still improving

The second case of flesh-eating bacteria was reported just days after Lana Kuykendall, 36, gave birth to twins on May 7. Doctors have since removed dead skin and tissue from both of her legs.

Lana Kuykendall, a paramedic, noticed a bruise on her leg and believed it to be a blood clot. She and her husband, Darren, raced to the hospital, and within 90 minutes, Lana was in surgery.

Lana had a normal pregnancy, and although she needed blood, the delivery went normally. Both of the twins are healthy.

Lana noticed the day after her delivery that her legs were sore, and she couldn’t stand or walk. However, tests didn’t reveal any problems, so the Kuykendalls went home.

The “bruise” appeared the next day, starting off the size of Lana’s palm, quickly growing to cover her whole leg by the time she made it to the operating room.

The National Necrotizing Fasciitis Foundation has reported that people have developed the condition through experiences such as having a C-section or natural childbirth, abdominal surgery, broken leg, cuts or scratches.

The disease occurs when flesh eating bacteria enter the body and emit toxins that destroy soft tissue, which becomes gangrenous and must be removed, according to the foundation.

The bacteria that causes necrotizing fasciitis in common in the environment but rarely cause a serious infection. When it do, the body’s immune system is almost always able to fight it off.

So far, Lana has undergone four surgeries with a possible fifth on the way. Doctors have not had to amputate any limbs, and they believe the spread of the flesh-eating bacteria has ceased.

Lana’s twins are being taken care of by friends and family while she recovers. While this new mom’s episode with flesh-eating bacteria is frightening, it gives hope to those who have been following the case of Aimee Copeland over past weeks.

Aimee Copeland is still in intensive care at an Augusta, GA hospital, and she is relying on a ventilator to breathe. But, she’s now smiling, even laughing according to her family and mouthing, “I love you.”

Aimee Copeland contracted a flesh-eating bacteria during an accident on a homemade zip line on May 1. The zip line snapped, causing Aimee to fall and cut open her left calf. Doctors closed the gash with 22 staples, but the flesh-eating bacteria that burrowed deep into the wound caused the rare but deadly infection Aimee is suffering from now.

Medications meant to keep Aimee calm have blurred her memory of the accident. She can’t remember the events that led to her run-in with the flesh-eating bacteria and that landed her in the hospital. When she regained consciousness Friday, she mouthed the words, “Where am I?”

“I don’t know that she’s aware yet that she’s lost her left leg,” her father Andy Copeland said. “It’s going to be sweet because she finally, we can communicate with her. But at the same time, it’s going to be bitter because there will be certain things revealed to her that will be painful.”

Aimee Copeland has already beat the odds by surviving the flesh eating bacteria infection. The fatality rate is upward of 60 percent according to a report published by the Clinical Microbiology Reviews.

A blood drive held for Aimee Tuesday drew so many donors that people were actually turned away.

Aimee Copeland continues to do better, communicating through a lip-reading game with her family, which often leads to laughter for the entire family. Aimee’s father has continued to update a blog he has kept to keep people informed about Aimee’s condition. His messages are full of hope and thankfulness, and even promising moments that once seemed like ordinary conversation that are now milestones for the Copeland family.

“Unlike before, she doesn’t ask where she is or how she got there,” Andy Copeland wrote. “She asks how Paige’s [Aimee’s sister] boyfriend is doing.”

Aimee’s father has urged others not to use homemade zip lines, saying to leave zip-line building to the professionals. The flesh-eating bacteria that affected his daughter is common in warm climates and in fresh water, like the Little Tallapoosa river where Aimee and her friends were zip lining.

Both the Copelands and the Kuykendalls are holding tight to hope, faith and family as they continue to watch these two courageous women battle the flesh-eating bacteria and overcome the staggering odds against them.