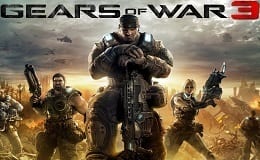 Not just an awesome conclusion; the best Xbox exclusive available

In a matter of hours, the highly-anticipated conclusion to the “Gears of War” trilogy will land on store shelves worldwide. The game that redefined third-person shooters on the Xbox 360 and spawned countless imitators is back, but is “Gears of War 3” a sequel worthy of your hard-earned cash? The answer to that question is an emphatic “YES!” We were fortunate enough to receive an early press copy from Microsoft, and have been shoving every other responsibility to the side to experience more and more of the addictive digital candy that is “Gears of War 3.”

To whet your appetite, we’ve compiled five solid reasons why this game will suck away your time and consume your every thought.

#1: Glowy Bits, Carnage and Color
The Lambent are more than just a new breed of enemy; they’re an ample source of gold, glowy explosions adding to a color palette that goes way beyond the familiar, drab browns and grays found in the prior two games. Epic has introduced an array of color which propels the graphical fidelity forward and, at times, will force you to admire the vibrant vistas, ornate buildings and mammoth setpieces at the risk of being obliterated by the Locust and Lambent hordes. Speaking of hordes…

#2: Horde Mode 2.0
The original Horde Mode from “Gears of War 2” ushered in a wave of imitators. After Epic pioneered this unique brand of co-op survival, tons of developers followed suit. Instead of simply iterating on its success, the designers have reinvented Horde Mode, adding in-game currency and an addictive tower defense element to what was already an insanely time-sucking mode of play. Build laser fences, construct decoys, erect auto-turrets and squash bad guys in the Silverback mech suit. We would honestly pay full price for this mode alone, it’s just that fantastic.

#3: Karen Traviss Wrote It
Just because the “Gears of War” series contains the highest concentrated dosage of testosterone available on a console, doesn’t mean it can’t benefit from an injection of emotion into its story of desperate times and human survival. In fact, when Epic Games realized they had an unexpected number of female gamers playing “Gears of War,” they not only introduced several female characters in the main storyline of “Gears of War 3,” but also signed on Karen Traviss to pen the script. Traviss has crafted five novels in the Gears universe, and her intimate familiarity with the lore, coupled with her talented writing, results in this conclusion of the trilogy having a cohesive, logical and surprisingly emotional undertone throughout; something the series has desperately needed.

#4: The Fate of Carmine
Just like the poor redshirts in Star Trek, destined to die during an away-party excursion, Carmine is the poor rookie in “Gears of War” who provided brief comic relief, and then is killed in a blaze of heroic glory. This time around, the fate of Carmine (there are four Carmine brothers in total) was left in gamer’s hands, as Epic decided to allow players to vote on the fate of Carmine in “Gears of War 3.” While we can’t divulge his actual fate (seriously, we legally can’t tell you), we can say that the developers repeatedly play with your expectations, and the results add a layer of comedic enjoyment to an already fantastic experience.

#5: Pretty Much Everything Else
If we were just faced with an outstanding single player experience and finely tuned competitive multiplayer, perhaps we wouldn’t gush so enthusiastically about “Gears of War 3.” Add in the addictive Horde Mode 2.0, plus Beast Mode which turns the tables and lets you invade the human survivors as the vicious Locust and Lambent, plus the opportunity to play through the campaign in smooth four-player co-op, plus the arcade twist which brings competitive action to the storyline…well, you get the idea. Epic Games and Microsoft haven’t just delivered a quality sequel, they’ve delivered a satisfying conclusion to a genre-defining franchise. To put it another way, “Gears of War 3” is, as of this writing, the best experience you can have on an Xbox 360, and one you’ll likely be playing for years to come.

Writer’s Note: A press copy of “Gears of War 3” was provided to the author by Microsoft. The game releases to retail on September 20, 2011.