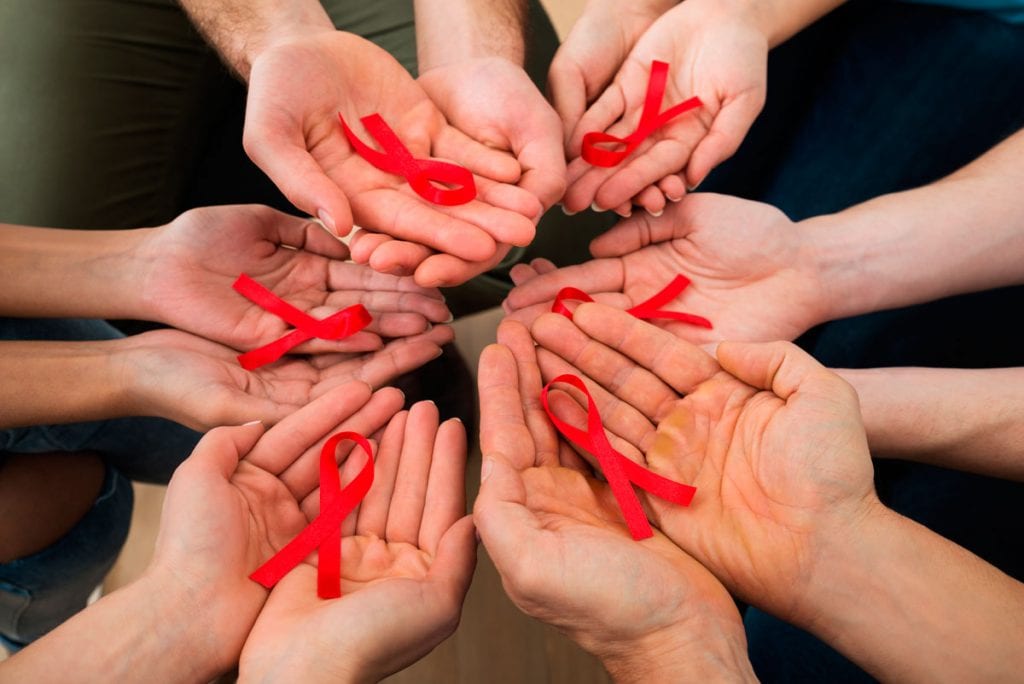 Since 1988, the World Health Organisation (WHO) and the United Nations (UN) have declared this date a chance to support those currently living with HIV, and to remember those killed by AIDS-related illnesses.

Only identified in 1984, the virus has killed more than 35 million people around the world. Sufferers continue to face stigma and ignorance while battling with one of the most destructive pandemics in history.

A recent survey shared on the World AIDS Day website showed than one in five people with HIV have experienced verbal harassment or threats; a third have had their HIV status disclosed without their consent by someone close to them; one in five were treated differently by their GP; and many reported pressure at work to disclose their status. 18 percent of the respondents also reported suicidal thoughts within the last 12 months, and 17 percent “often” skimped on food due to poverty.

This Saturday, awareness events, celebrations of life and fundraising campaigns will spread information across the globe. The White House will display their annual 28-foot red ribbon to reaffirm a commitment to eradicate AIDS—a goal the UN hopes to achieve by 2030.

Here’s how you can help.

Whether it’s to support your local community or distribute contraception around the world—donating to a HIV charity, the (RED) Campaign or The Global Fund is the easiest way to help sufferers and foster research. Some great charities, include:

AIDS United—supports over 300 organizations with grants and advocates on behalf of people living with HIV on a local, state, and national level

AmfAR: The Foundation for AIDS Research—one of the world’s most important and ambitious funders of HIV research

Elizabeth Glaser Pediatric AIDS Foundation—the HIV charity that has made the greatest impact in prevention, treatment, and care of at-risk women and their children in the developed world

Elton John AIDS Foundation—funds programs that others don’t, such as groups fighting HIV criminal laws and activists demanding needle exchange programs in states that ban them

In 1991, 12 artists met in New York at a time when HIV was highly stigmatized and suffering communities were largely hidden. The artists avoided traditional colours associated with the gay community to convey that HIV was relevant to everyone. They chose a red ribbon for boldness, passion, the heart and love.

Now, the red ribbon is a universal symbol of awareness and support for people living with HIV. Show that you refuse to allow stigma to distort disease by distributing or purchasing ribbons and displaying your support.

Raising awareness does not have to mean raising money—education is so important for eradicating ignorance, encouraging testing, knowing the symptoms of HIV, and supporting loved ones. Talk casually about HIV, be an active listener, download posters, repost World AIDS Day Twitter and Facebook prompts and share your story if HIV has affected you, or those close to you. The UN’s short documentary, ‘A New Picture of Health’ can also be used to spread awareness. Access it, here.

If you’re keen to raise funds to help sufferers and researchers—bake sales, raffles, car washes, quiz-nights and sponsored runs are all tried-and-tested, fun ways to make a difference. More specifically, organize to wear red at school or at work on World AIDS Day. You can collect donations from everyone who wears red, or get sponsored to sport an outlandish, red-themed outfit all day.

According to the UN, 9.4 million people living with HIV don’t know their status. HIV can be transmitted at any time through blood, semen, vaginal fluids and breast milk, so regular checks are crucial for protecting and empowering yourself, as well as other people.

The Centers for Disease Control and Prevention (CDC) suggests that anyone who has unsafe sex or shares drug needles should get tested at least once a year. What better time to begin than on World AIDS Day?

Further reading: Eight Charities to Support on International Day of the Girl Child