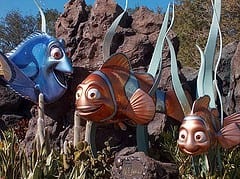 The film will be called ‘Finding Dory’

Finding Nemo was one of the most beloved films in Disney history—and that’s saying a lot, which is why it was always surprising the company didn’t book a sequel to try and capitalize on the success of the film.

But that question isn’t lingering any longer: Disney has announced a sequel to Finding Nemo, called Finding Dory. The film will follow Ellen DeGeneres’ character, Dory, and will take place about a year after the events of the first film. Returning characters include Nemo, Marlin and Tank Gang, along with others not yet confirmed. The director of the first film, Andrew Stanton, will also stay on board.

Disney announced plans for the new film in a press release on Tuesday.

“Got any plans for November, 2015? Well now you do! Get ready to return to the Big Blue for Finding Dory! Pixar is hard at work, getting ready to bring back your favorite characters like Nemo, Marlin, the Tank Gang, and of course, Dory (voiced by none other than Ellen DeGeneres). We know November 25, 2015 is a long time to wait, so until then we have some Dory-inspired advice for you: just keep swimming!”

Rumors have swirled for years about a sequel, but Tuesday’s press release confirmed many previously-unknown details, such as the Novermber 2015 release date.

Ellen DeGeneres, for her part, was thrilled with the announcement.

“I have waited for this day for a long, long, long, long, long, long time. I’m not mad it took this long. I know the people at Pixar were busy creating Toy Story 16. But the time they took was worth it. The script is fantastic. And it has everything I loved about the first one: It’s got a lot of heart, it’s really funny, and the best part is—it’s got a lot more Dory.”

The film’s director said he is excited to focus on Ellen’s character this time around, which she does so well.

“There is no Dory without Ellen,” Finding Nemo director Andrew Stanton told IGN. “She won the hearts of moviegoers all over the world—not to mention our team here at Pixar. One thing we couldn’t stop thinking about was why she was all alone in the ocean on the day she met Marlin. In ‘Finding Dory,’ she will be reunited with her loved ones, learning a few things about the meaning of family along the way.”