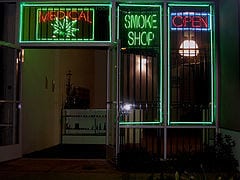 The raids were focused on storefronts that were engaged in illegal drug trafficking and money laundering. According to Reuters, U.S. Attorney Jenny Durken said the U.S. Drug Enforcement Administration named several dispensaries that were essentially operating under the state’s medical marijuana law to conceal criminal activity.

Federal officials did not immediately name the number of suppliers that were shut down in the sweep.

According to Reuters, the Cannabis Defense Coalition, a nonprofit advocacy group for marijuana, said on its website that 15 “medical cannabis access points” in at least six western Washington cities – Seattle, Tacoma, Olympia, Puyallup, Lacey and Rochester – were raided on Tuesday.

A spokesperson for Durkan’s office, Emily Langlie, said one person was arrested by federal agents and that additional arrests had not been made across three counties but she could not say how many.

Tuesday’s dispensaries sweep marks the first major federal crackdown on marijuana shops in western Washington since Governor Christine Gregoire vetoed most provisions of a bill that would have established a new regulatory system for medical marijuana, Reuters reports.

Federal prosecutors said they were not going after patients who have a legitimate medical need for marijuana.