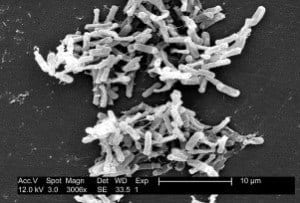 Self poop-enema saved man from months of pain

C. Difficile, also known as Clostridium difficile (pronounced klos-TRID-e-uhm dif-uh-SEEL), is a bacteria that is most commonly found in hospitals and nursing homes. C. difficile is spread through feces and can cause mild symptoms like diarrhea or cause life-threatening colon inflammation. The Mayo Clinic wrote, “Without effective cleaning, its hardy spores can persist on surfaces for months…But simply coming into contact with the bacteria doesn’t always cause illness. Ironically, taking antibiotics can trigger C. difficile infection. Antibiotics destroy some of the protective bacteria in the gut, allowing the C. difficile to grow out of control.”

C. difficile caused a man from Nova Scotia to take extreme measures to cure himself of symptoms: a self-injected fecal transplant. The man had been suffering with C. difficile ever since he underwent a routine surgery a year and a half ago. The Huffington Post reported that the man “was so frustrated and ill that he decided to get rid of the infection once and for all by giving himself an enema last Friday using feces belonging to his cousin that had been tested for other infections and parasites.” He told the newspaper, “It’s a nasty topic to discuss, but fecal transplants work, and I was not ready to wait any longer.” Apparently, his doctor was supposed to do the transplant today. All he did was mixed his cousins fecal matter with water and used an enema to flush it into his colon.

According gastroenterologist Dr. Lawrence Brandt, the “poop enema” treatment is a last resort, “But it’s very efficient, with a cure rate of 90 percent for first-time users. Plus, it’s safe with no adverse effects, and its fast, sometimes solving the problem within hours.”

C. difficile is easily preventative; the Mayo Clinic recommends “vigorous hand washing with soap for 30 seconds” because “the friction of rubbing removes the spores” in order to reduce your risk of having to see for yourself the healing power of poop.