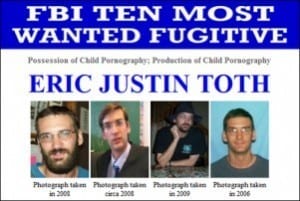 “Changing mission” at the bureau

Authorities said Eric Toth, who also goes by David Bussone, taught third-grade at a Washington D.C. elementary school and was fired in 2008 after a co-worker reportedly found illicit images of young students on his camera.

Toth has not been seen since leaving the school but his car was found at a local airport containing a suicide note. No body has been found. Authorities believe Toth is still at large and is still a threat to the community, “We don’t have a belief nor do we have any proof that he committed suicide,” Special Agent Ronald Hosko said.

The bureau is confident that the FBI Most Wanted List will lead to a tip as the where the fugitive is, especially when the reward is $100,000.

Toth, 30, is described as 6-foot-3 and weighing 155 pounds. He has green eyes and brown hair, and has a distinguished mole under his left eye. He is a “computer expert” authorities say and advertises services online as a tutor or nanny in attempts to prey on children.

The other spot on the FBI Most Wanted List is still vacant, “It could take months to pick somebody,” said Kevin Perkins, head of the FBI’s criminal and cyber branch. “You have to weigh one guy against another.”