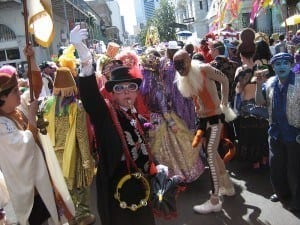 Fat Tuesday is just days away and the celebrations are revving up across the country.

Fat Tuesday, the day that marks the end of Carnival festivities in cities like Rio de Janeiro and New Orleans, is celebrated in predominately Catholic and French regions of the world. But Fat Tuesday’s reputation for partying, indulgence and all-around gluttony make it an international event that brings all types of people out to have a little fun in the otherwise dreary month of February, no matter what their religious beliefs or origins may be.

This year Fat Tuesday occurs on February 21, but the parties begin several days before, and the parade season begins more than a month prior. Although the week leading up to Fat Tuesday is the most popular time for parades and parties, Carnival Season actually begins on January 6th, the day twelve days after Christmas known as Twelfth Night.

In places like New Orleans Mardi Gras celebrations halt normal activity and turn the French Quarter into an array of almost nonstop parties and parades.

Mardi Gras celebrations are known for their massive quantities of beads, booze and food, but the name is actually French for Fat (gras) Tuesday (Mardi.) Historically this is the last day to indulge before the fasting period of Lent begins in the Catholic Church. This is the period when something, often a favorite food, is sacrificed until Easter.

St. Louis does not historically have a significant French Catholic population, but their Mardi Gras celebrations sometimes attract hundreds of thousands of tourists.

Fat Tuesday celebrations occur throughout the United States, as well as in other parts of the world, in many forms. Some cities have huge organized Carnival celebrations that last days or weeks, while in others individual businesses, primarily bars and restaurants, host events on Fat Tuesday or the weekend before.

Come February 21, paczki, king cakes, costumes, parades and parties will abound as people from all over the world and from all walks of life and celebrate Fat Tuesday.