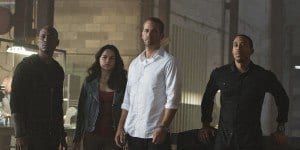 The Fast & Furious series returns to the big screen this weekend with the release of the seventh movie from the sequel set to release on Friday, April 3.

The newest film is the final film featuring the late Paul Walker and is said to be Universal’s biggest release in movie history with the film screening in more than 4,000 theatres nationwide.

The picture is expected to gross approximately $115 million in the U.S. alone and it is also predicted that it will perform well overseas as well with an expected revenue of nearly $250 million according to Hollywood Reporter.

It’s likely the the Fast & Furious sequel will reign as the biggest opening of 2015 with potential to exceed The Hunger Games: Mockingjay – Part 1 which brought in 121.9 million in 2014. In the event that Furious 7 exceeds those sales, it will rank the second largest three-day opening since The Hunger Games: Catching Fire released in 2013.