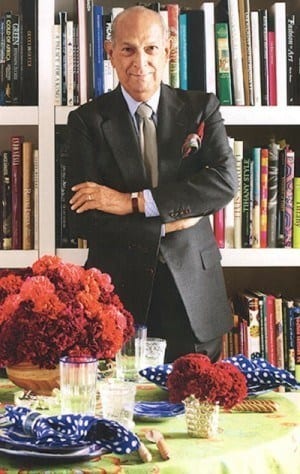 If you ever wanted to look like a princess, Oscar de la Renta would have had the perfect design in mind for you.

Oscar de la Renta, a long-time, revered designer who enrobed stars and political royalty in glamorous dresses for decades, died on Monday, October 20, 2014 at the age of 82.

It would be impossible to pick up a magazine covering red carpet events without seeing at least one dress designed by Oscar de la Renta. He had designed dresses for celebrities like Sandra Bullock, Cameron Diaz and Oprah Winfrey, as well as gowns for several first ladies of the United States, from Jackie Kennedy to Michelle Obama.

So who was this man behind the designs? How did he get to the place he was?

Oscar de la Renta grew up in the Dominican Republic and went to study painting in Spain, where he worked part-time jobs drawing clothes for newspapers and fashion houses. One day, Francesca Lodge, the wife of the US ambassador to Spain, saw de la Renta’s sketches and gave him a commission to create a dress for her daughter. That dress was soon featured in Life magazine.

His career took off, but de la Renta’s mind was always working on new ideas. He has expanded beyond clothing to venture in other realms, such as home furnishing and fragrances. In 2006, he created a bridal line, which was perfect for his style of work since he specialized so much in formal gowns. He could take elements such as ruffles, rosettes, and lace and put them together in a way that is timeless. I can’t see any of his designs ever becoming called “tacky”.

Not only did he design specific dresses for celebrities, he also owned retail stores that sold ready-to-wear designs (at expensive prices, of course).

I would characterize his designs as feminine, classic, and even a bit whimsical – definitely a world away from what we would consider loud and edgy. It’s a different form of beauty that focuses on the old-school brand of romantic. The continuous use of classic themes like roses, lace and ruffles might seem boring to some, but I never cease to be breath-taken by his spins on classic textures and materials. There’s always some new, subtle spin in each design.

If you want to learn more about his life or see his work, check out this page on his fashion website: http://www.oscardelarenta.com/the-house/

The United Kingdom’s Metro has done a feature on Oscar de la Renta’s Most Iconic Dresses Worn By Hollywood’s A-List.