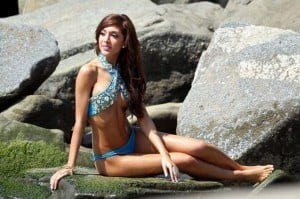 Farrah Abraham, known for her time on the reality show “Teen Mom,” reportedly made a sex tape with adult film star James Deen.

Deen confirmed the existence of his and Abraham’s tape to TMZ, saying “Word travels fast. It isn’t even edited yet. We shot it yesterday.”

Steve Hirsch, president of the adult film company Vivid Entertainment, said he has seen the tape and is doing everything he can to get the rights to it.

TMZ reported that Abraham was going to take legal action, but she might try to release the tape on her own terms, according to the New York Daily News.

According to Deen, the couple is not dating, and their relationship is limited to the work they did together on the alleged tape.

The tape is supposedly close to 30 minutes long and is being presented to various adult film companies for purchase.

Abraham posed for a photo shoot in various swimsuits hours after she reportedly made the sex tape with Deen.

Abraham was arrested for driving under the influence last month. She also reportedly has an obsession with celebrity Kim Kardashian and has undergone cosmetic surgery on her nose and chin to look more like her idol. Some speculate that Abraham made the sex tape to be even more like her Kardashian.

Now that Deen made comments about the tape’s existence, Abraham is supposedly upset with him for leaking information about the tape. Deen said he thinks the tape was made to look as if it were personal, not professional, and then be released to the public.

Abraham told Fox she will not sell the tape for anything less than a couple million dollars.