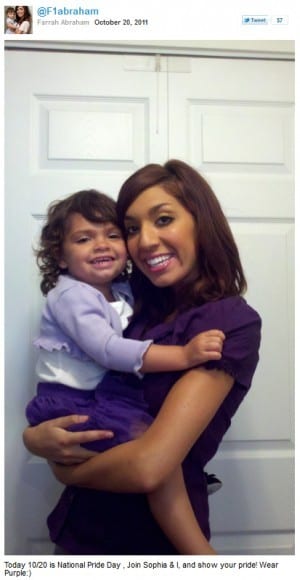 Farrah Abraham has had enough of Gary Shirley’s behavior. While watching last night’s Teen Mom finale, she told him as much via Twitter, which led to an out-and-out feud between the stars.

The scuffle started when Gary got in a fight with ex-girlfriend Amber Portwood over custody of Leah, their daughter. On the series finale, Gary called Amber a “slut puppy” and threatened to never let her see Leah again. Farrah Abraham, seeing the exchange and disgusted with Gary’s treatment of Amber, tweeted that he was a pig and needed “mental help.” Gary responded that he wouldn’t stick up for Farrah anymore.

Farrah Abraham responded that Gary was “too negative” and needed to focus on Leah, and the situation escalated from there. The argument peaked when Gary tweeted, “Your cry face sucks and so do your cookies. Unless you change your going die lonely.”

Apparently, Gary isn’t the only one who thinks so. While Farrah Abraham has been in culinary school, her daughter, Sophia, has been back in Iowa with Farrah’s mom. When Farrah returned to Iowa during the series finale, Sophia told her, “Mommy, you’re a bad person.”

Despite all the hate, Farrah Abraham is on the road to independence and success, having gotten all A’s on her report card.