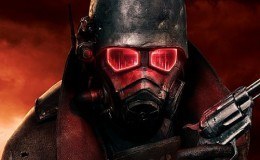 It’s been almost two years since Bethesda Softworks took the isometric role-playing “Fallout” franchise and melded in into the world of first-person shooting and open world exploration with their award winning “Fallout 3”. Now, Obsidian Entertainment, a studio comprised of some of the developers of the original “Fallout”, is looking to not only capitalize on Bethesda’s success, but also forge its own legacy with the sequel, “Fallout: New Vegas.”

In “Fallout: New Vegas”, you play as an unfortunate courier who winds up being left for dead in the desert after being robbed of a casino chip by a flashily dressed man and his gang of thugs. After being saved  and nursed back to health by the local townspeople, you’re tasked with hunting down your ambushers and unravel the mystery surrounding the robbery.

In typical “Fallout” fashion, the story in “Fallout: New Vegas” is less about entertaining a particularly complex or gripping plot and more about giving you an excuse to encounter eccentric characters and visit bizarre locales, something which “Fallout: New Vegas” has plenty of. Whether its a remote outpost manned by bored soldiers, a town massacred by a gang of slaves dressed up as Roman centurions, or the glowing New Vegas strip, “Fallout: New Vegas” has no shortage of fascinating settings to discover.

It is the drive to venture out into the unknown and explore that will truly convince you that playing for hours on end without break is a good idea; not the game’s actual story line. If you are a lore buff, there’s certainly enough back story to be found through conversing with “Fallout: New Vegas’” colorful cast of characters, but most will find looting a killer-insect infested gas station more enthralling than anything the plot has to offer.

If you’ve played “Fallout 3”, you’ll know almost exactly what “Fallout: New Vegas” is all about. You still allocate your stats, skills and perks based on your desired school of combat (ranging from melee, to guns, to laser rifles, to explosives, etc.) or what type of proficiency you wish to specialize in (repair, speech, bartering, etc.).

Killing things, performing a skill, and accomplishing objectives earns you experience points, which eventually grant more skill points that can be invested to develop your character. If you want to be an ace marksmen with a gift for the gab or a professional with the blade who enjoys crafting their own weapons and ammo, the option is available. In fact, like “Fallout 3”, the amount of customization is almost staggering in “Fallout: New Vegas”, allowing you to truly model your character however you please.

The degree of freedom you’re given in “Fallout: New Vegas” extends to your actual actions as well. If you want to be a serial killer who shoots people in the face for fun, you can totally do that as long as you’re aware that the townspeople might turn on you and certain quests will become impossible to complete.

Even if you decide to be a saint and choose all the obviously morally righteous options during pivotal moments in missions, you still can steal from people (which is highly advisable) or shoot someone if they’ annoy you. On top of all this, you can gain fame or infamy with certain factions in the game depending on the decisions you make. This may not sound like a particularly big deal, but the ramifications of the alliances you make are pretty far reaching once you realize everyone is busy trying to kill one another.

A lot of games have morality systems, but like its predecessor, “Fallout: New Vegas” is one of the few that genuinely allow you to do whatever the hell you want, consequences be damned.

Combat in “Fallout: New Vegas” is virtually unchanged. You can still choose to play “Fallout: New Vegas” like a conventional first-person shooter, but you’ll more than likely end up dying over and over again unless you utilize the game’s V.A.T.S feature. When you activate V.A.T.S, the game comes to a halt and you’re given the ability to target certain parts of your opponent’s body. A shot to the leg will slow them down, while shooting their weapon will send them scurrying in retreat. Of course, your accuracy and the amount of damage you deal with your weapon is modified based on your stats, the terrain, the armor your target is wearing, whether you’re crouching or running, etc.

Rest assured, “Fallout: New Vegas” is every bit of a RPG as “Fallout 3”. With so much running beneath the hood that governs how everything interacts with each other, Rambo-like tactics will just get you killed. Even though you can now look down the iron sights of your firearm, whether or not you’ll get that decapitating head shot is based on a lot more than just your aim and reflexes. Of course, basic FPS tactics, like grabbing cover or using the environment to lure enemies into choke points, are still completely viable.

“Fallout: New Vegas” is challenging, even on medium difficulty. Ammo is generally plentiful, but even though you have V.A.T.S on your side, it can still take several rounds to drop certain enemies. Combine this with the fact that you’re almost always outnumbered by bad guys who usually are better armed and can shoot straighter than you, death is a fairly routine occurrence.

“Fallout: New Vegas” also offers Hardcore mode where it essentially makes the game more realistic. For instance, you actually have to eat food and drink water and so on. There’s a special reward to be earned from playing the game from start to finish on Hardcore mode, but considering I spent the better part of my first play through watching my character’s head get ripped off by sniper fire over and over again, I have yet to dabble too much with it.

Unfortunately, while “Fallout: New Vegas” borrows the best parts of “Fallout 3” is also borrows the worst. The computer is still borderline retarded, and there are still an insane amount of glitches that cause everything from enemies and items to float in mid-air, to quest triggers not activating, to the game completely crashing. It’s worth noting that given “Fallout: New Vegas’” enormous scale, bugs would be inevitable. However, that doesn’t make them any less irritating, especially when it means having to reload an old save and praying that a game breaking glitch doesn’t pop up again.

Visually, “Fallout: New Vegas” is pretty disappointing. While its environments are humongous in scale and do a superb job of entertaining the illusion that you’re actually traveling in a post-apocalyptic wasteland, a lot of textures are really ugly up close and the character models look downright hideous. Again, it is understandable that a game as big and interactive as “Fallout: New Vegas” has to cut corners in order to do what it does best, but the graphics look untouched since “Fallout 3”, and they didn’t look all that great back in 2008 to begin with. If that wasn’t bad enough, frame rate issues are prevalent, particularly when you’re traveling through wide, open areas.

Still, as homely as the graphics might look at times, the sight of humongous, killer insects is more than enough to make your skin crawl. Toying with people’s inherent phobia for big bugs is still something “Fallout” excels at.

Some claim that “Fallout: New Vegas” is too much like “Fallout 3.” That sentiment is definitely true. Even with the new content it brings, the gameplay and the graphics are almost identical to that of its 2008 Game of the Year Award Winning predecessor. But wait. Stop and re-read that again, and then ask yourself if that really is such a bad thing.

“Fallout 3” was an amazing game, and so is “Fallout: New Vegas.” It doesn’t push the envelop or reinvent the “Fallout” franchise like “Fallout 3” did, but it delivers an incredibly long (30-80 hours depending on how many side quests you take on and how much time you spend exploring) adventure that fans will absolutely love.

Now if only they had fixed those damn technical problems…

Take a risk and put your money on Bethesda Softworks’ and Obsidian Entertainment’s latest. It’s a wager you won’t regret.

Previous ArticleWhy they fell out of loveNext ArticleBad reasons to breakup