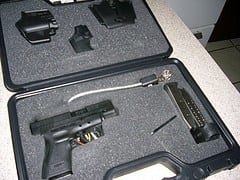 An executive order designed to expand gun control laws without congressional approval is being considered by President Obama, according to Vice President Joe Biden.

In the wake of last month’s massacre at Conneticut’s Sandy Hook Elementary School, Obama has said he is weighing proposals to curb gun violence, including a ban on assault weapons, and is willing to take any route necessary–even if it means an executive order which would become law without a vote from Congress.

Vice President Biden revealed the possibility of an executive order before a Wednesday meeting with victims of gun violence. Biden has been charged with the task of coming up with gun law proposals by the end of the month and reporting them to the President.

“We are not going to get caught up in the notion that unless we can do everything, we’re going to do nothing. It’s critically important that we act,” Biden told the press. “There are executive orders, executive action that can be taken. We haven’t decided what that is yet.”

Biden did say that, outside of an executive order, he has “three or four or five” policies in mind, but declined to comment on specifics. The Washington post reported that the proposals may include a more intensive screening process when purchasing a gun, a limit on large magazines and a national system designed for tracking the sale and whereabouts of weapons.

Biden met with gun violence victims and anti-gun groups Wednesday, and on Thursday will meet with the National Rifle Association and other pro-gun groups. Among the attendants on Thursday will be representatives from Walmart, the U.S.’s largest gun seller.

Biden has experience crafting gun control policy, as he helped write the Brady Bill, which in 1993 instituted a national five-day waiting period for retail purchases of handguns.

“This is not an exercise in photo opportunities or just getting to ask you all what your opinions are. We’re reaching out to all parties on whatever side of the debate you fall,” Biden said.