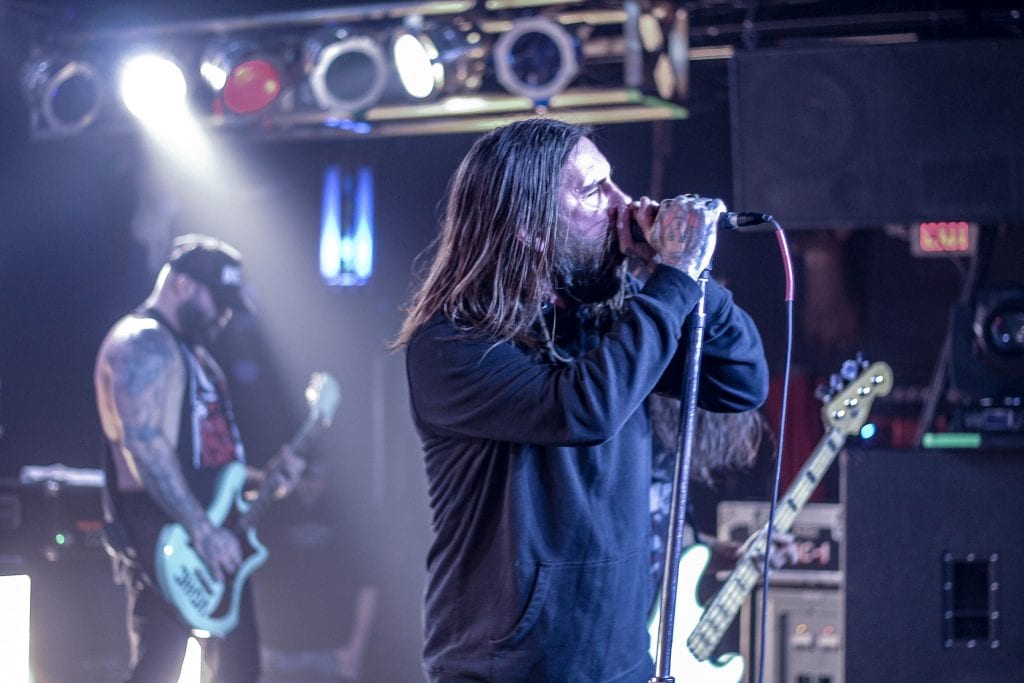 After 12 years, Every Time I Die made a triumphant return to the Machine Shop in Flint, Michigan. The venue, which had a slight western theme with restrooms labeled as “cowgirls” and “cowboys,” and a literal chain for a barricade, erupted with screaming fans and staff trying to capture crowd-surfers the second Keith Buckley stepped on stage. His vocals sounded as if he has the ability to rip through sandpaper, starting off the show with Roman Holiday. Guitarists Jordan Buckley and Andy Williams shred through the riffs with undying power and control, while bassist Stephen Micciche had control of the undertones in each song. Clayton Holyoak, the group’s drummer, had one of the most calming facial expressions I had ever seen on a drummer. Throughout the entire show, he maintained an appearance of being thoroughly at peace with the environment around him.

“Peace,” however, is one of the last things a fan of Every Time I Die should expect at one of their shows. With an abundance of people creating circle pits, crowd-surfers and head-bangers galore, beer seemingly falling on you from every direction, and getting kneed in the head multiple times (personal experience within the photo pit), it’s safe to say that the Machine Shop’s western theme lived up to the hype of Every Time I Die—wild, wild, wild.

The crowd, just as excited as the band were to be back, kept the energy alive throughout the 21-song set. With classic hits like The New Black, Pigs is Pigs, The Coin Has a Say and We’re Wolf mixed in with crowd favorites like Apocalypse Now and Then, Petal, Romeo a Go-Go and Decayin’ With the Boys, there was a bit of something for everyone at the show and it was hard not to be ecstatic throughout the entirety of it. Vocalist Buckley kept the crowd going as well, stopping between songs here and there to not only say a few words of encouragement, but also to check in with crowd members to see if they were still having a good time (shout out to the person on a swing). One interesting highlight of the setlist was that Every Time I Die decided to end their set with Fear and Trembling, which normally is an opener song throughout most of their previous tour dates post their latest album, Low Teens.

For a band that’s been around for nearly two decades and released eight stellar LP’s, it’d be easy to say that a group has “worn out” on stage and in studio, or become “too tired” and “boring” to continue putting on kick-ass shows—Every Time I Die is not one of those groups. During their final song, guitarist Jordan took the initiative to stage-dive and the crowd carried him from the stage all the way to the back of the venue, near where they had their merch setup. As the Flint stop was their final run on their recent US tour until the Vans Warped Tour this summer, I truly don’t think Every Time I Die could have seen a better send-off crowd than the one in Michigan.