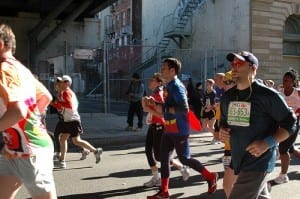 As the 37-year-old reality star ran the New York City Marathon on Sunday, his girlfriend of eight years, Jenna Morasca was showing her support while standing outside the Memorial Sloan-Kettering Cancer Center, reports People.  Zohn has spent a lot of time in the center himself undergoing treatment for his Hodgkin’s lymphoma.

Zohn says the race was very stressful to him physically, but his mental strength carried him through.  “I knew with every step I was crushing little cancer cells on the road,” he reveals.  “I even wrote ‘f–k cancer’ on the bottom of my shoes. That’s what kept me going.”

The support from his loved ones also gave him the stamina to keep pushing himself.  When Zohn finished the race with a time of 4:20:46, Morasca was waiting for him at the finish line. “She was right there, by my side, as always,” he says.  “I gave her a big fat hug and a big sweaty kiss and it was worth every second of it.”

The New York City Marathon was the second marathon Zohn has completed.  His nest chemotherapy treatment is scheduled for Tuesday.