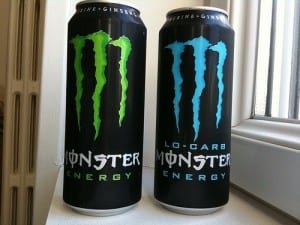 Caffeine levels in the drinks ranged from 6 to 242 milligrams per serving. By comparison, an 8-ounce cup of coffee contains on average about 100 milligrams of caffeine. Although moderate doses of caffeine aren’t harmful for adults, heavy and daily use can have severe side effects which include insomnia, fast heartbeat and muscle tremors.

However, there is no legal requirement to list the amount of caffeine in the beverage. A Monster official told Consumer Reports, “Our products are completely safe, and the actual numbers are not meaningful to most consumers.”

It’s not advised for children to drink energy drinks and should limit their caffeine consumption to about 100 milligrams a day. Monster is currently being sued by the family of a 14-year-old girl with a heart condition who passed a way after drinking two Monster Energy drinks within 24 hours.