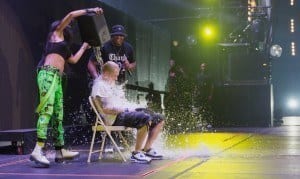 Eminem and Rihanna wrapped up their sold out Monster Tour in his hometown of Detroit on Saturday and they went out with a bang.

Eminem, who was nominated by his mentor Dr Dre was stopped by hype man Denaun “Mr” Porter as he was exiting the stage. Porter reminded Eminem of the challenge that he accepted in which he replied, “I knew this shit was coming, but—tonight?”

He then sat in a chair while Rihanna took the honor and drenched him with a bucket of ice water in front of approximately 45,000 fans. He then turned to nominate Porter, producer Rick Rubin and Rihanna herself who did in fact accept the challenge.

The ALS Ice Bucket Challenge has gone viral to raise awareness and raise money towards research for amyotrophic lateral sclerosis.

Amoyotrophic lateral sclerosis is a terminal illness that causes muscles to weaken and stiffen. Celebrities like Lady Gaga, Iggy Azalea, Justin Timberlake and Drake, among others have taken part in the campaign.

Those who participate are doused with a bucket of ice water to raise awareness and are asked to donate to the ALS Association.

Check out the video here and click here for more information regarding ALS.