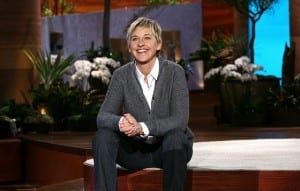 The comedian was hailed a trailblazer and awarded the highest humor prize in Washington D.C.

Ellen DeGeneres was the 15th recipient of the Mark Twain Prize for American Humor in D.C. Monday night, an honor long overdue. The 54-year-old comedian received her award Monday night at the Kennedy Center in a ceremony that will broadcast on PBS on Oct.30. DeGeneres says of her award and PBS, “Thanks to everyone at PBS. I am so happy to be a part of your farewell season.”

The honor awarded to Ellen DeGeneres has previously been given to the likes of Tina Fey, Whoopi Golberg, Billy Crystal and Bill Cosby. Will Ferrell received the award last year.

Many agree that DeGeneres stands out amongst other comedians for her unique take on comedy. In addition to garnering attention for being “one of those universal, observational, non-mean-spirited comedy voices,” according to Sean Hayes, Ellen DeGeneres is recognized with this honor, and by fellow comedians, as a trailblazer for the comedic world. Jane Lynch said that DeGeneres cleared the way for other gay actors and comedians by coming out about her homosexuality.

“She went out there with a machete, metaphorically, and blazed a trail for everybody else when she came out of the closet. She was the one who stood up and was counted…the path today that I walk has been cleared by her.”

When asked about the Mark Twain Prize honor, Ellen DeGeneres said, “I’m in really good company. There are a lot of people I respect that have won this award.”