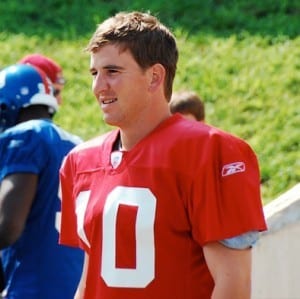 Eli Manning hosted “Saturday Night Live” over the weekend, and although the Giant’s quarterback felt “a little bit out of [his] element,” he still did a pretty good job.

Eli Manning, in his monologue, made the audience laugh right off of the bat, “It’s great to be here hosting Saturday Night Life. After two Super Bowls, this is definitely the third most exciting night of my life.” Eli Manning said that even though he wasn’t born there, playing for New York has made him feel like a real New Yorker; he then proceeded to give fantastic recommendations to tourists in the audience like the best place to get Italian is Olive Garden.

Eli Manning appeared in drag, as Miss Chicken Fried Steak who couldn’t comprehend losing in a drag show and the third unknown member of Cheech and Chong, but Eli Manning really flourished in the skits Text Message Evident, Little Brothers and Motion Capture where Eli Manning decides on a iconic move, like Tebow’s, by miming making a sandwich, dropping it on the ground, making sure no one is watching and then taking a bite.

Eli Manning is getting positive reviews for his performance especially since the quarter back hasn’t had much experience in the acting world.

Rihanna was the guest singer on Saturday’s show and E News called her song Where Have You Been, “one of the most elaborate sets a performer has had this season.”