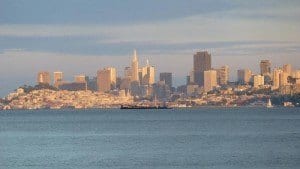 An earthquake woke up residents of the San Francisco area this morning around 5:33 local time.

The earthquake measured at a 4.0 magnitude that hit the Bay Area did not cause any damage, though BART (Bay Area Railroad Tranist) temporarily stopped service but quickly resumed. L.A. Times reports that the U.S. Geology Survey said the epicenter was about a mile from East Richmond Heights- about 13 miles from San Francisco City Hall. Apparently, there have been two other earthquakes 3.0 or greater in the past ten days.

One Twitter user perfectly summed up how native Californians react to most every earthquake, “All of San Francisco just woke up, tweeted, and are now going back to bed for an hour.”

San Francisco wasn’t the only place to feel an earthquake today; a 4.9 was felt halfway around the world in New Delhi, India. According to Daily Bhaskar, the earthquake “shook the capital and certain areas in its neighbouring states of Haryana, Rajasthan and Uttar Pradesh,” and was “the 19th tremor in the country this year so far and the third in the past five days.” A scientist with IMD’s Seismic Department, RS Dattatrayam, said “Dehli will continue to experience these quakes and tremors as it falls on the junctures of faults and ridges.”