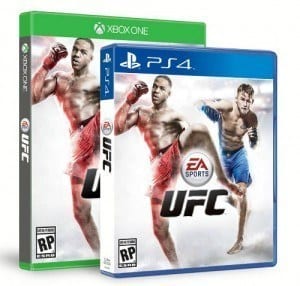 After obtaining the UFC license from failing game studio THQ, the group at EA Sports thought they had the fighting market in a chokehold. With the popular, yet recently absent Fight Night series under their belt, adding UFC all but locks down the fighting genre for EA Sports.

Unfortunately, owning the rights to the franchise doesn’t necessarily mean you’re going to deliver a game that lives up to the UFC name, and EA Sports UFC should be a case study for that point. With the money and talent that EA Sports has behind them, the expectation is that fans of the hand-to-hand sport will be able to relive their favorite fights and create new ones, with all the bravado that the UFC delivers.

Let’s get ready for disappointmeeeeeeeeeeeent!

It seems that UFC is simply a victim of a game rushed out to meet a deadline. Granted, with franchises like Madden and FIFA showing annual releases that, despite minimal changes, are still great to play, it’s not unexpected to see UFC getting kicked out before it’s polished, but the fact that EA Sports has delivered a game that seemingly fails to complete a thought is frustrating.

Combat, the majority of your experience, is uninteresting at best and feels empty. Kicks and punches can be thrown in some fantastic combos to drop your foe, but unfortunately each of them feels empty. There’s simply no sense of impact when you strike a foe, particularly when you land a knockout blow. Entirely different from the Fight Night series, where a haymaker made itself known, with UFC you feel like Rocky Balboa, standing in a meat freezer punching slabs of beef. Opponents have no response.

The ground game isn’t much better, with players resorting to frantic pushes and pulls of the right stick that can move your player to a better position to beat or submit your opponent. The biggest issue, and it’s something that’s carried over from the THQ days, is that there’s no real indication of how you’re doing, beyond gauging your position in relation to your opponent. While veteran UFC players may easily distinguish the ground position, those of us who don’t spend hours and hours playing the game have no idea what’s happening. It devolves into a frantic button-mashing event.

EA Sports should be commended for adding in a bit of content with the career mode, but again it’s far too stunted to be praised entirely. Players will begin on The Ultimate Fighter, UFC’s reality show that’s aimed at taking amateurs and turning them professional. You’re introduced to your trainer, then start working towards your fights in an attempt to win the finals and become a pro.

After finishing what is an extremely short experience on the show, you’re then introduced to Dana White and some other personalities of the show. Random videos trickle in after each match or after your training sessions — of which there are three in between each fight — but it’s hardly enough to be considered “content”. Instead you’ll end up skipping each video before too long and, as you max out your character, will start skipping even the training too.

The regular gameplay, including online versus actual players, is hardly any better. While EA Sports is actively patching the game to remove unfair advantages owned by characters like Bruce Lee, it’s still just a brawler with no need to go to the mat to show off your technical skills. You’ll stand toe-to-toe with your opponent and throw combos, doing your best to avoid their clinches, until eventually one of you falls.

The difficulty is a strange curve, as well. On normal, you can be winning a match handily, only to get knocked-out by one well-timed spinning kick or haymaker. Turn the difficulty down and you end up finishing every fight, even against the best players, in 30 seconds or less.

While I expect the UFC franchise to get better with EA Sports behind it, right now it’s simply a disappointing game. There have been no visual glitches (though some have reported them), but the gameplay is bland and uneventful. Content is lacking and combat is a boring game of rinse and repeat.