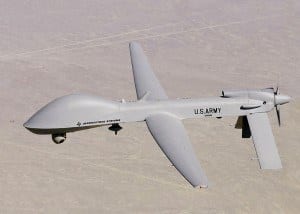 Drones are being used to conduct surveillance on US soil, FBI Director Robert Mueller revealed for the first time Wednesday. Sen. Chuck Grassley (R-Iowa) inquired about the scope of drone roving, and Mueller stated that drones are used in very narrow cases for surveillance, following in the footsteps of the Drug Enforcement Agency and Bureau of Alcohol, Tobacco and Firearms.

“It’s very seldom used and generally used in a particular incident when you need the capability,” Mueller said when asked about the FBIs use of drones for surveillance. “It is very narrowly focused on particularized cases and particularized needs.”

Mueller also stated that the bureau’s development of policies governing drone use and privacy protections is just starting.

“We are in the initial stages of doing that,” said Mueller, adding that this drone program is in its infancy. “I will tell you that our footprint is very small. We have very few of limited use, and we’re exploring not only the use, but the necessary guidelines for that use.”

Responding to inquiries over protections that the FBI has in place for privacy, Mueller stated the main safeguard is the way drones are used. Mueller also added that drones were used “in a very, very minimal way, and very seldom.”

This revelation about the FBI’s drone program comes as lawmakers and civil liberties groups are raising concerns about government intrusions of privacy following the leaked disclosure of two guarded National Security Agency surveillance programs that monitor and collect Americans’ phone and email records. So despite the reassurances from Mueller, several legislators are alarmed over this revelation about the drone program—but ambiguously in some cases. Sen. Dianne Feinstein (D-Calf.), while being a supporter of the recently revealed date collection program of the National Security Agency, told Mueller that drones present risks to Americans’ privacy.

“I think the greatest threat to the privacy of Americans is the drone, and the use of the drone and the very few regulations that are on it today, and the booming industry of commercial drones,” Feinstein said.

Sen. Mark Udall of Colorado, an Intelligence Committee member who has been critical of government surveillance, was also alarmed by this news. He was concerned that the FBI had not yet developed a policy to regulate its drone use.

“Unmanned aerial systems have the potential to more efficiently and effectively perform law enforcement duties, but the American people expect the FBI and other government agencies to first and foremost protect their constitutional rights,” said Udall in a statement. “I am concerned the FBI is deploying drone technology while only being in the ‘initial stages’ of developing guidelines to protect Americans’ privacy rights. I look forward to learning more about this program and will do everything in my power to hold the FBI accountable and ensure its actions respect the US Constitution.”