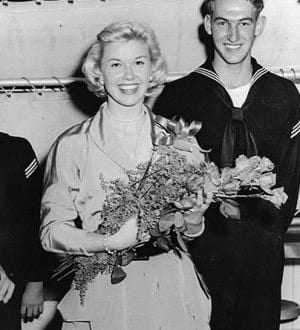 TCM recognizes her as Star of the Month for April

Doris Day is 88 today, and TCM is celebrating her birthday by making her the Star of the Month for April.

Doris Day gained fame as a singer in the late 1930s. In 1948 she made her first starring-role appearance in Romance on the High Seas and was a sensation. She became known for her virginal characters like Marjorie Winfield in On Moonlight Bay, a role which she reprised in By the Light of the Silvery Moon, and Cathy Timberlake in That Touch of Mink, in which she thwarts Cary Grant’s attempts at an affair in order to save her virginity for marriage.

Doris Day was not always playing the well-groomed good girl. In Calamity Jane, Doris Day portrays the Wild West heroine by the same name, although the movie is only loosely based on the real Calamity Jane’s life.

If you want to catch Doris Day in her classic roles and hear her songbird voice, TCM will air 26 films beginning Monday, April 2 and continuing through Friday, April 6.

Doris Day is a film legend, but has also been referenced in hit songs like Billy Joel’s We Didn’t Start the Fire, Wham!’s Wake Me Up Before You Go-Go, Dig It by The Beatles, and Wrap Her Up by Elton John.

She even had a full verse of Sandra Dee from the hit musical Grease dedicated to her. The song refers to the virginal actresses of the 1950s.

“Hey I’m Doris Day/ I was not brought up that way/ won’t come across/ even Rock Hudson lost/ his heart to Doris Day.”

Anne Bancroft won an Academy Award for her portrayal of Mrs. Robinson.

Check out Doris Day as TCM’s Star of the Month throughout April.