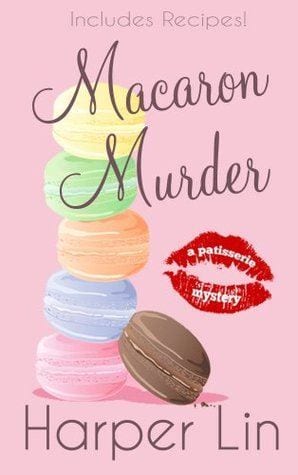 Macaron Murder, written by Harper Lin, is a short mystery novella that takes place in Paris. Clemence Damour returns to her parents’ posh and fancy apartment in Paris after some global adventuring. Her parents own a successful patisserie, which sells delicious pastries and desserts that are good enough to appease even the crankiest of neighbors, la gardienne.

However, the day after delivering the macarons to la gardienne, the cranky old neighbor is found dead in her apartment with a half-empty box of macarons nearby. Because of this detail, Clemence is immediately placed as a suspect, so she goes out of her way to investigate the other possible suspects in order to clear herself and to find the true culprit. In the meantime, she is also developing chemistry with a cute guy with a typewriter, and she spends time with her good friends at the patisserie.

True to the cozy subgenre, Macaron Murder treats the murder of la gardienne lightly, as well as sex scandals between the inhabitants of the posh apartment. Murder? Quite awful, but just a problem to solve. The light tone of the story kept the novel easy and fun to read, for its short length. However, the downside of having such a short length is that side characters don’t enough space to be fleshed into three-dimensional characters. We’re stuck with some simple caricatures such as the gruff and dismissive inspector. Clemence comes off as a bit distant at times, but ultimately I found her intelligent and likable.

With that in mind, the novella is fun and reads fast. The narrator’s little explanations of French culture were welcomed for context. The vision of Paris painted by this novel is clean, posh, and sweet. Overall, I recommend this book as a quick read. It won’t take long to finish it and the mystery is fun to follow, as Clemence goes through her list of suspects to find the true culprit of the crime.