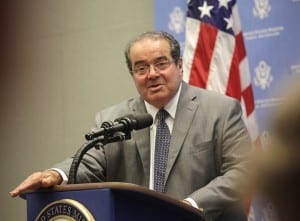 The Supreme Court does their country proud

DOMA (the Defense of Marriage Act) stood as a medival attempt to deny equal rights. At least that’s what I think. That is why I’m so glad that the Supreme Court ruled yesterday against DOMA and California’s Proposition 8.

As I see it, America has a long history of hating equality. We like to think we lead the way in equal rights because the Declaration of Independence stated that “all men are created equal.” But the fact of the matter is that a large part of the American population doesn’t actually want equality.

Nothing makes that more evident than DOMA. When President Clinton signed it into law in 1996, it was supposed to placate both sides of the gay marriage argument. Gays could be married in certain states, but the federal government would not recognize them as legally married. DOMA basically says to gay couples that their marriage is only sort of legal.

But now DOMA’s done. Sure it was a narrow vote (5-4), but it was ruled unconstitutional. Married gay and lesbian couples are finally being accepted as the same as heterosexual couples.

I have to say that I’ve never been more proud of my country. This is the most important decision the Supreme Court has made since they outlawed segregation and allowed inter-racial marriage. DOMA and legislation like it was holding our country back from becoming the shining beacon of hope that we believe we are.

Of course, not everyone thinks this was a good decision. Justice Antonin Scalia led the opposition to the decision. He believed that the Supreme Court had no business in ruling on DOMA’s constitutionality.

“We have no power to decide this case,” Scalia’s dissent said. “And even if we did, we have no power under the Constitution to invalidate this democratically adopted legislation. The Court’s errors on both points spring forth from the same diseased root: an exalted conception of the role of this institution in America.”

I’d like to ask Justice Scalia how the discrimination promoted by DOMA differs from racial discrimination. He’s been strong proponent of integration and racial diversity. I love what he said in 1994 in Adarand Constructors, Inc. v. Peña about racial preference.

“To pursue the concept of racial entitlement – even for the most admirable and benign of purposes – is to reinforce and preserve for future mischief the way of thinking that produced race slavery, race privilege and race hatred,” Scalia said. “In the eyes of government, we are just one race here. It is American.”

So why aren’t gays and lesbians considered part of the American race?

DOMA is as detrimental to America as the type of racism promoted by giving minorities preferential treatment for past wrongs. It’s time that we stop looking at it as us vs. them. Like Justice Scalia said, we are one race, American.

DOMA was a law filled with backwards thinking and fueled by hate. America should have no place for that. So I applaud the Supreme Court for reminding us what true equality is.