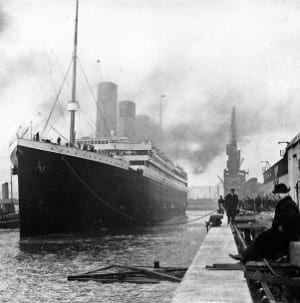 The previously untold stories of the Titanic’s four-legged passengers are exhibited at Widener University.

Widener University will host an exhibit in memory of the fateful voyage of the ill-named “unsinkable ship.” Part of the exhibit will feature the dogs of the Titanic.

Dr. Edgette, the producer and curator of the exhibit, told Yahoo news that ship records and eyewitness accounts confirm that 12 dogs were on board the Titanic when it sank, but there may have been more. Unfortunately, only three dogs of the Titanic survived.

Many people consider their pets to be members of the family, and apparently it was just as true 100 years ago as it is today. But how did these three lucky dogs make it out alive?

“The dogs that survived were so small that it’s doubtful anyone even realized they were being carried to the lifeboats,” Dr. Edgette said, “Two were Pomeranians and the third was a Pekingese, all tiny dogs.”

The surviving dogs belonged to a Miss Margaret hays, the Rothschilds, and the Harpers of Harper & Row Publishing.

Only first class passengers had dogs on board, so the fact that these three tiny dogs had well-to-do owners didn’t help their chances, although they were more likely to reach a lifeboat. Even John Jacob Astor’s Airedale, Kitty, perished when the Titanic sank.

William Carter of Philadelphia insured his daughter’s King Charles Spaniel for $100 and his son’s Airedale for $200. The children were unable to save their pets from the ship’s kennel before evacuating, and the insurance company paid the settlement for the dogs, Mrs. Carter’s jewelry, and their 1912 Renault. The Renault, which they purchased in Paris, was brought back to life by James Cameron in the movie Titanic, and is the setting for the movie’s steamiest scene.

Perhaps the dogs of the Titanic should have taken followed suit with the ship’s cat. Most ships had cats aboard to chase off rats, including on the Titanic. However, according to Dr. Edgette, the legend is that the ship’s cat did not make the voyage across the Atlantic.

“It’s said that there was a cat with young kittens aboard the sea trials of the Titanic, but when the ship arrived in Southampton from Belfast, she was seen disembarking. Up and down the gangplank she went, retrieving one kitten at a time that she deposited on the dock. She and the kittens quickly disappeared and it was later said that she had some sort of premonition that the voyage wasn’t going to be a good one.”

Whether the cat had a crystal ball, or the commotion made in preparations for the maiden journey made her fear for the safety of her kittens is unclear. However, the cat was another lucky survivor who narrowly escaped a tragic end aboard the Titanic.

The Titanic exhibit will opens at Widener University April 10 and will run until May 12. In addition to the dogs of the Titanic section, visitors will learn how the Titanic has impacted pop culture, details about the ship, and the Widener family for whom the University is named, and who had three members on board.